From Dunk City to Chris Chiozza, Florida’s universities have had some memorable moments during their March Madness runs.

Game winners. Big dunks. Improbable comebacks. Each of the moments in this list provides the context of the game and how the memorable play went down.

Although sports betting in Florida is not legal, there is massive March Madness engagement across the country in states that have legalized it.

According to the American Gaming Association, the 2022 NCAA men’s basketball tournament will see 45 million Americans place an estimated $3.1 billion in bets.

Florida entered the 2017 NCAA tournament as a No. 4 seed. The Gators dispatched East Tennessee State by 15 in the first round, then blew out Virginia in the second round by 26. UF squared off with a streaking Wisconsin team that downed No. 1 seed Villanova in the Round of 32.

The game was a back-and-forth battle throughout. Wisconsin led most of the first half, while Florida led most of the second half. Up by 11 with around 4:30 left in the game, Florida looked like it had punched its ticket to the Elite Eight.

However, Wisconsin roared back, drawing even with three seconds left after a Zak Showalter three-pointer that sent the game to overtime. The Gators were down 83-81 with four seconds left in OT.

Guard Chris Chiozza took an inbound pass, raced down the court, then let it fly with a floater from beyond the arc. It dropped through the net with no time on the clock, and the Gators headed to the regional finals. 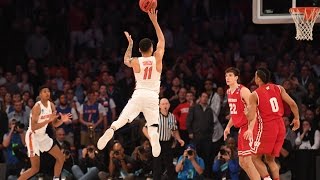 2000: Miller beats the buzzer against Butler

Back in 2000, the upstart Butler Bulldogs had the Florida Gators down one point with eight seconds left. The Bulldogs were at the line for the second of two free throws. They missed, UF grabbed the rebound and kicked it out to guard Teddy Dupay.

Dupay dribbled his way down the left side of the court. He tried to attack the lane, but with nowhere to go, he dumped the ball off to star Mike Miller. Miller mounted a drive from the three-point line and knifed his way through a pair of Butler defenders near the free-throw line.

Half-stumbling, half-falling forward, Miller released a floater that arced over the outstretched arm of a Bulldog defender. It landed cleanly through the rim as time expired.

Florida Gulf Coast University was in the Big Dance for the first time in team history. They put on a performance that would live on forever.

The team became the first No. 15 seed to make it to the Sweet Sixteen. They did it with a level of flair that was absolutely mind-blowing.

The team earned the nickname “Dunk City” because of the filthy dunks the team freely inflicted on opponents throughout the tournament. Perhaps no dunk was more iconic than the Brett Comer-Chase Fieler alley-oop against Georgetown.

FGCU was down against the Hoyas in the second half, but put together a 21-2 run to surge ahead. Despite that run, Georgetown managed to keep the game somewhat close. With about two minutes left in the game, FGCU was up by seven points after the Hoyas made a bucket.

FGCU inbounded the ball into the teeth of a Georgetown press. An open Comer took a pass and drove to the basket. With two Hoya defenders collapsing on him, he casually flipped the ball toward the rim. Lanky Chase Fieler soared across the lane and threw it down.

The announcers couldn’t contain themselves after the barbaric dunk. “Are you kidding me?,” Clark Kellogg said.

“Brett Comer, welcome to your Kodak moment, my friend. Not worrying about the pressure, just throws it to the sky.” 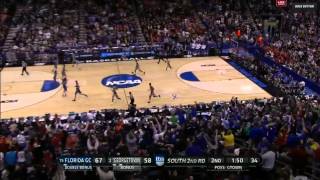 Florida State had a fantastic run in the 2019 tournament as a No. 9 seed, and you could argue it truly gained steam in their second-round matchup against No. 1 seed Xavier.

The Seminoles played from behind most of the game, going down as many as 12 points in the second half. The Seminoles tied it at 68 with about two minutes left. Xavier hit a pair of free throws with 1:49 left in the game.

The Seminoles’ Trent Forrest turned the ball over, but then stole the ball back with 1:18 left in the game. He dribbled down the middle of the court, then passed to P.J. Savoy on the wing.

Savoy set his feet and buried a three to put the Seminoles ahead, 71-70. Xavier never scored another point.

Savoy went on to hit a pair of free throws with 22 seconds left to put FSU up three. The ‘Noles hit another two free throws to seal the win, 75-70.

The upset propelled Florida State into the Sweet 16 for the first time in seven years. The ‘Noles then beat Gonzaga by 15 to advance to the Elite Eight for the second time in program history.